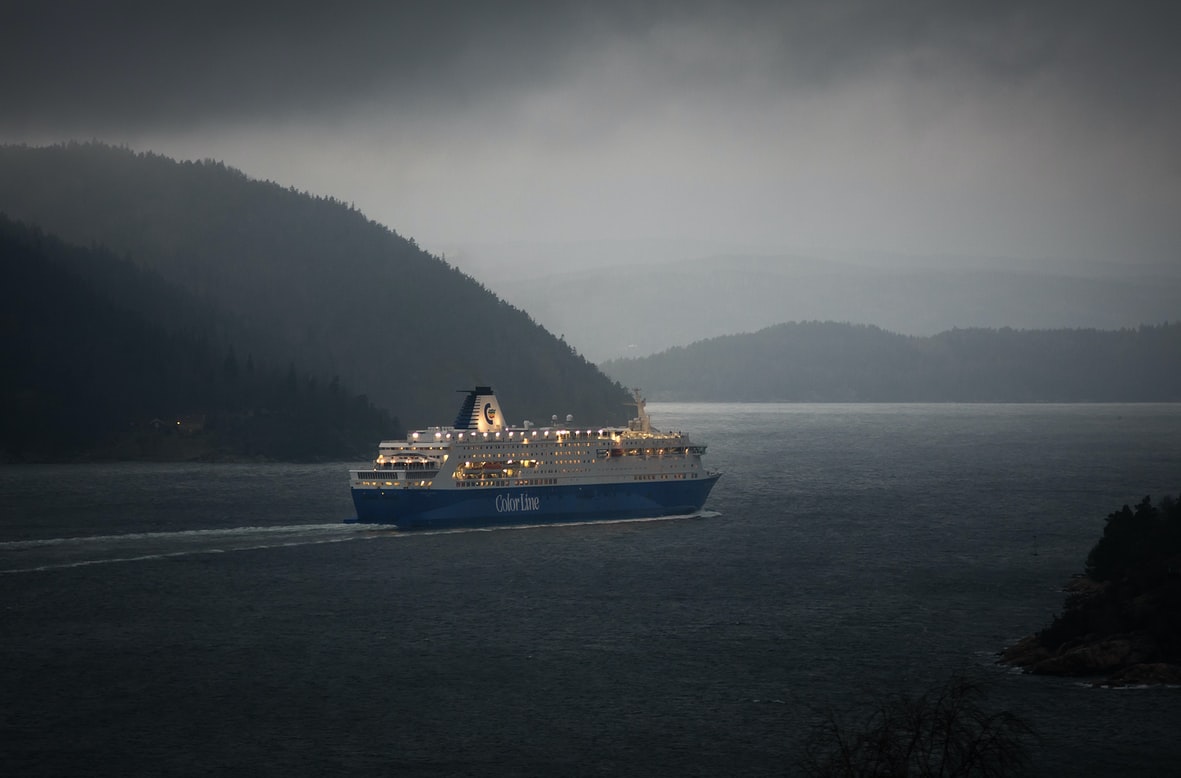 Again he had the powerful sense of being in the presence of death. Not feeling haunted or terrified: something calmer, as if he were walking in a graveyard. He knew it was no good lying in the dark waiting for his mind to move on (he’d tried that more than once), so he got up quietly and put on his dressing gown and slippers. Leaving Moira snoring peacefully, Charlie opened the cabin door cautiously – it creaked unless you handled it just right – and went out on deck.

It was perhaps between three and four in the morning, and apart from the low thrumming which he assumed came from the engines, the cruise ship Camminatore sul Mare was quiet. There was no moon, but the air was fresh and the sky was clear, filled with more stars than he ever remembered seeing before, as though every space in the heavens must be filled with something, however dim and impossibly distant. He went to the rail and leaned on it, looking out in vain for the far-off lights of any other vessels or an island (though he knew in theory there should be no land anywhere near them).

It was not cold, even in his nightclothes, but after a moment a tiny cool gust brought a wet sea smell and a few long fingers of mist. As he watched, more smoky lines of vapour started appearing at the front of the ship, and before long it was clear they were heading into a bank of fog. There was no change in the motion of the Camminatore, and he pictured the captain (or whoever was in charge at this godforsaken hour) up on the bridge gazing confidently, unworried, into the murk. That imagined square-jawed man in a white naval uniform, with a full set of neatly-trimmed whiskers; he would not be disturbed by mere atmospheric moisture. Steady as she goes, Mr. Mate!

By now the fog was thick. The stars were hidden away, the odd flashes of the ship’s lights reflected from a wave or from their own wake could no longer be seen, and gradually a soft white wall formed itself a few feet before his face. Was that it for the rest of the night? He hung on, hoping that they would soon pass through the bank of fog; he wanted to witness the white barrier dissolving as quickly as it had come.

All at once there was another ship alongside them. It was following an exactly parallel course in the same direction but moving significantly faster so that it was steadily passing them by. It was at least twice the size of the Camminatore and alarmingly close. It was brightly lit and full of active people. He had barely had time to notice the bows pass him by, boldly emblazoned with what must have been the huge ship’s name: Kharon. There were definitely people on deck there, with drinks in their hands, standing and talking idly under strings of coloured lights. A late party, it seemed. Nothing like that would ever happen on his ship; the passengers were all elderly. They were impatient for their dinner by seven o’clock and the majority were tucked up in bed with a book by ten. So far as he could tell, the people on the other ship were not particularly young either, but they did not seem to need their sleep, or even a chance to sit down with a cup of tea. On the whole Charlie thought he preferred the Camminatore.

None of the folk over there looked in his direction, or seemed worried or even interested by the way they were steaming past no more than a couple of yards away. No one was worried on the Camminatore, either, it seemed: the decks were dark and silent, there was absolutely no-one about and the vessel held firmly to its course, thrumming as stolidly as ever.

The portholes of a row of cabins passed him by now, many lit up from within, and then an open side deck where the passengers were dancing an old-fashioned waltz, without much obvious enthusiasm or skill, he thought. Still noone seemed interested in the Camminatore, but as they passed someone threw a large white flower which landed on the deck quite near him. He thought it might be a lily: too large for a buttonhole, unless you were dressing up as an aesthetic poet of the eighteen nineties but perhaps the sort of thing a woman might have worn. He could not see who had thrown it, or judge whether they meant it for him.

Suddenly there was a brief chill wind which brought a slightly musty smell, and he felt with full force that sense of being among the dead. Was this, then, a ghost ship he was seeing? It hardly seemed like it: there was much more life over there than on his own vessel. The vast ship had been passing for over a minute now, yet he was no more than half-way along its length. On his ship, he occupied the topmost passenger deck; on the mighty vessel passing by he could see there were four higher ones; perhaps seven levels in all.

Should he raise the alarm? Or shout a warning? The decks of the Camminatore were empty and only dimly lit. There was no one he could consult, to confirm his own impression of great danger. The other ship was slicing efficiently through the water, never coming even slightly closer. Surely it would take only the smallest deviation to cause a long, grinding collision? Both ships would fare very badly, but he had no doubt that his would come out worse, and might even sink.

Before he could make up his mind to any action, the stern deck of the other ship came into view. It was long and open, with a large swimming pool in the centre. At one end a small orchestra had set itself up and was playing a version of In Paradisum from the Fauré Requiem. It was one of his favourite pieces of music, and ridiculously, he felt calmer and reassured. This view was a bit better than the cocktails or the dancing; there were even people sitting in deckchairs. He listened until they slipped away ahead of him. The stern of the great ship was rapidly approaching and now he feared the wash at the rear might cause problems.

‘Ahoy!’ he shouted at last, but feebly and without conviction. Nobody responded and soon the other ship had passed and was receding into the distance. It seemed to have taken the fog with it; the sky twinkled brightly again.

He walked forward, to a place where he could look up and see what he took to be the Camminatore’s bridge: brightly lit with a sense of purpose about it. From where he stood figures could be seen moving about unhurriedly. It seemed clear that the place was manned and no concern was felt. In the end, he went back to bed.

“Bit of a near miss last night?” he said to Moira over the breakfast table.

“Well, I got up about three in the morning and there was this huge cruise ship sailing right past.”Moira frowned.

“I’m pretty sure nothing like that can have happened,” she said, “you must have dreamed it.”

“Let me go and check,” she said, and to Charlie’s embarrassment she got up and accosted a passing officer. Charlie pretended to be absorbed in his toast until she came back.

“You must have been looking at my book. How to Avoid Huge Ships, by Captain Trimmer. I bought it because I thought it was a funny book, but it’s actually quite serious. Apparently tricks of perspective and so on mean that sometimes little yachts and things don’t realise they’re about to be run down by some big container ship or something until it’s too late. You must have had a look at it, and the idea of colliding with a bigger ship got stuck in your brain and came out in a dream. Like that time I told you about the lion, and you had nightmares about being mauled.”

“I don’t remember seeing your book, let alone reading it. But certainly there would have been no avoiding this ship once it was bearing down on you. I should not like to have been in a yacht near that thing – I wasn’t altogether happy on our ship.”

‘Well, what then? You think it was like the Flying Dutchman? The ghost of the Titanic?’

“No, I don’t know. It seemed so real, but I suppose it must have been just a dream.”Charlie didn’t altogether believe that.

After breakfast, he went and looked for the white lily that had been thrown across from the other ship, but of course he did not find it. It would have been swept up and tidied away earlier on even if it ever existed. He wished now that he had picked it up, though he was sure Moira would have been able to explain it away. He accepted now that what he had seen was not entirely real, but he did not share Moira’s belief that the boundary between the real and the unreal was firm and carefully respected by the entities on either side. He didn’t want to say out loud to his wife what he truly thought in his heart. He believed the ship he had seen was, in some obscure way, an omen. Not a literal vision of the future but somehow a symbol of passage, of people going on, that prefigured the death of someone close to him. All too likely, it must be Moira herself. He did not want to tell her he thought she might be about to die.

In fact he was mistaken about that. Moira was in excellent health and lived for another twenty-five years. However, of all the things that are hard to see, our own death is the most invisible. Charlie himself passed away quietly in his sleep that night, when the stretched blood vessel in his brain gave way and did fatal, irreparable damage. Whether he avoided the huge ship and made the crossing on a great shining bridge, or riding a golden chariot of fire, we cannot know.

Liam Keller currently lives in Winnipeg, Manitoba. He is a part-time law student and works at a pet grooming and boarding facility, writing in his spare time. He began writing during his undergraduate studies in Toronto, pursuing it more seriously over the past year, during the pandemic.